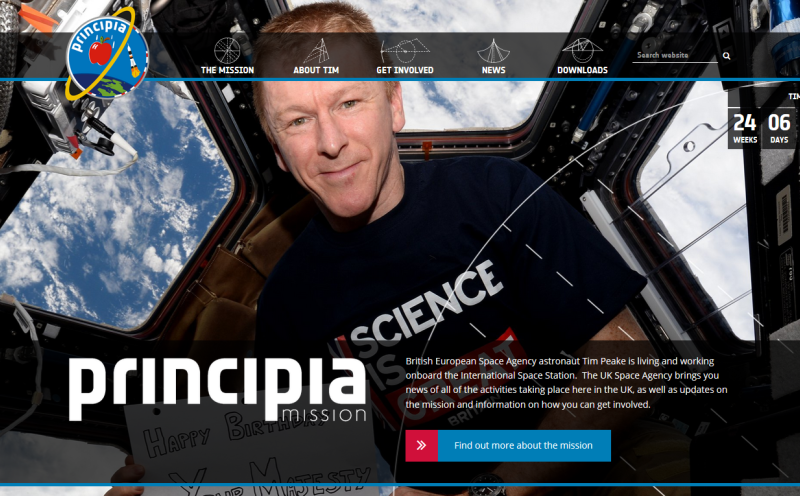 It feels like just last week we helped launch the campaign website we built for the UK Space Agency, but Tim Peake returns to Earth today after six months on board the International Space Station.

Retaining a delicate balance between authority and amicability, Principia.org.uk boasts a captivating visual design, and has helped convey Tim’s aims during his six-month spell aboard the ISS.

But rather ironically, despite Tim’s mission being accompanied by a multi-channel digital campaign, internet access on board the ISS is actually something of a miracle.

There are significant challenges with getting the internet up and running in space, beginning with not being able to run a handy fibre-optic cable from the ground, to the lack of a planetary-scale Wi-Fi network – latching on to a hotspot in space is a challenge.

The vast majority of communication with the ISS happens via radio. Radio is a pretty straightforward means of broadcasting information, and the atmosphere doesn’t block its waves, so you don’t have to worry about the air absorbing the signal you’re sending out.

In fact, radio waves are so straightforward that this is how we communicate with most artificial satellites. A signal is beamed up to the ISS’ antenna – allowing them to receive a solid signal that enables their computers to download an email, or upload information.

However, there are limitations to how fast the radio-based connection can communicate, and one of the biggest issues is distance from the source.

Unsurprisingly, the internet on board the ISS is slow. Astronauts have rated it “worse than dial-up” but it’s there, at least, and it allows the team to write emails, post pictures and call home to their loved ones.

To infinity and beyond

There is a potential upgrade for space connectivity being tested. If this optical technology can be implemented, the ISS will enjoy the web at significantly higher speeds through the wonders of laser beams!

In the meantime, the ISS will continue to talk, send data, and tweet with the earth via radio signals, beamed down through a constellation of satellites.

Tim Peake may have his feet back on terra firma, but the Principia Mission campaign website will continue to showcase the cutting-edge space activities co-ordinated from UK. With the space industry providing the technology and infrastructure for services such as weather forecasting, navigation, global communications and broadcasting, space technology has become an essential part of everyday life.

Impressed by our work with the UK Space Agency?

We are Connect – the original web development agency. We have been providing best-in-class web, data and development services to public and private sector clients since

Previous: On-page SEO factors that search engines love
Next: What is quality content?