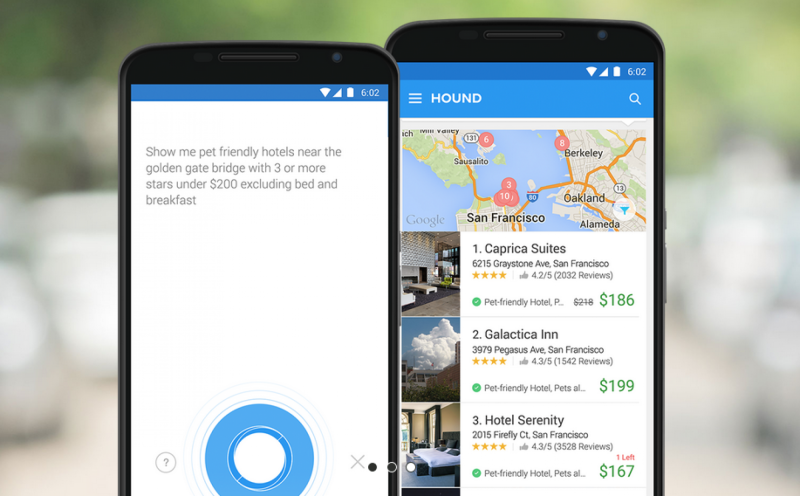 The emergence of a determined startup

As we rolled into the surprisingly murky month of June, a grainy video containing a rough demo of a new voice search tool appeared on YouTube and took the digital sphere by storm. Part research tool, part personal assistant, the recently launched Hound app contains all of the key ingredients required to create a revolutionary digital cocktail that could shake the voice search industry to its foundations – so hold onto your search hat and prepare to be blown away by Hound.

If you’re reading this, the chances are you’ve already heard about Hound, or you’ve dabbled in mobile voice search before and are looking to see what all of the buzz surrounding this new app is about. Allow us to make one thing clear before we start: Hound is likely to be unlike any voice search app you have used before. Hound isn’t just an app for checking the basics – it’s an app that allows you to simply tap a button and ask almost anything. That in itself already sets the app apart from the somewhat disappointing tools already in the digital domain. In order to get such an impressive app to market, SoundHound CEO, Keyvan Mohajer chose to take a very different approach to the standard entrepreneurial script.

Mohajer founded SoundHound back in September 2005 with the ultimate goal of creating a standardised way for humans to communicate effectively with computers, and for computers to communicate back. Having raised substantial investment from a number of key partners, the SoundHound team, having realised that their dream for a standardised way to connect voice search to inquisitive users was still some time away from becoming a reality, developed an interim strategy – the development of a music recognition app that would allow them to support the production of Hound through ads and fees paid by record labels and stores when users made purchases after searching for tracks via SoundHound.

Chances are you may have already come across SoundHound before – it has been downloaded over 260 million times since launching . The app is in a very similar vein to Shazam, except SoundHound’s intelligent identification tech can even recognise songs that you hum. This penchant for going above and beyond what is expected by the user has naturally encouraged the development of the revolutionary new Hound app.

A decade after a bold pitch to investors asking for a considerable degree of patience, Mohajer’s dream has finally materialised in the form of Hound, a voice search app that is capable of processing complex queries and producing perceptive answers in a matter of milliseconds.

To give you some indication of the power behind the Hound app, in the demo video above Mohajer asks: “How many days are there between the day after tomorrow and three days before the second Thursday of November in 2022?” Hound spits out the correct answer with such speed, precision and confidence that you’d be forgiven for assuming you had been transported into a distant future packed with unimaginable tech. However, this isn’t the case – Hound is simply that good already.

To prove that Hound’s spectacular guesswork isn’t just a calculated fluke, Mohajer fires off a number of searches in quick succession: “When is the sun going to rise two days before Christmas of 2021 in Tokyo, Japan?” and “What is the population of the capital of the country where the Space Needle is located?” are both answered in less time than it would take for you to rise to your feet.

Mohajer also showcases the app’s ability to answer queries that are closely related and systematically built upon each other. For example, in the video above he asks: “What is the population of Japan?” and then “What about China?” This degree of detail has yet to be seen across Google Now or Siri, so the game appears very much to be on, and the advantage currently lies with Hound.

At this moment in time, users do have to ask questions directly within the dedicated Hound app, but SoundHound remain hopeful that they can push the tech at the heart of the Hound experience to every app, device and industry available to them. The likelihood of wide-spread adoption is a little unlikely at this time, but the sheer scale and simplicity of the Hound demo suggests that this reluctancy may well be very short lived.

Aside from the obvious core features, what is particularly impressive about the Hound app is the complete lack of noticeable lag in either the asking or answering of questions. The absence of frustrating waiting periods is down to SoundHound expertly combining speech recognition and language processing into one engine, rather than treating them as separate tasks.

This may all sound incredibly positive for Hound, and in many ways the tool IS revolutionary, but there is one major drawback for the platform that may be too imposing for SoundHound to overcome: it is launching at a time when both Apple and Google are actively ramping up their efforts to contextualise our vocal queries. At last month’s I/O conference, Google unveiled its refined ‘Now on Tap’ feature as part of the latest iteration of Android. The refresh will allow developers to integrate the intuitive ‘Google Now’ platform inside every third-party app on the market and will undoubtedly aggregate a considerable amount of contextual information for the company – cementing their status as the go-to search engine further.

And in yet another dynamic development in the voice search arena, Apple also lifted the lid on the impressive renovation of its ‘Siri’ platform at its annual WWDC conference earlier this week. The new ‘Proactive’ feature will surface relevant information to the user, encouraging them to tap through to additional sites and negate the need for users to install third-party apps in order to discover whatever it is they need to know.

The SoundHound team could potentially overcome these hurdles by encouraging developers to adopt its third-party ‘Houndify’ API that allows developers to natively build Hound’s voice search tools into their own apps, but will developers be willing to go all-in on a platform that at present is only being used by a handful of curious beta testers? The initial Hound demo video is undoubtedly impressive, but it remains unlikely that the wider developer community will be willing to adopt Hound’s voice tech without the general public getting their hands on it first.

An unconventional path to success

We could potentially play devil’s advocate with this scenario, and encourage Apple, Google or any other company looking to radically push its search efforts to snap up Hound, its knowledge and tech without haste. If the Google team could get their grubby mitts on the tech behind Hound, the battle for search supremacy may well be over before it even truly begins. The unfathomable power Google could potentially yield with the speed, knowledge and understanding of Hound at its fingertips would be interesting to see in action, but could potentially eliminate all search competition from the game entirely. Is Google bold enough to step in and make a bid for Hound? Only time well tell, but the company does have previous form when it comes to poaching emerging startups and adding them to its bustling roster, so the move isn’t entirely out of the question.

For the time being, Mohajer hopes to push speculative propositions to one side, and aims to focus on bringing the very best user experience to those willing to measure the early efficiency of Hound. Mohajer believes Hound’s current performance and user experience is more than enough of a reason for users to add yet another app to their packed home screens.

Where does Hound go from here? Its trajectory is unclear, but the app’s initial promise is unprecedented, and the future is likely to be bright for those  developing the astute search tool.

Previous: Twitter’s Audience Insights
Next: Co-operation is driving the fight against cyber crime