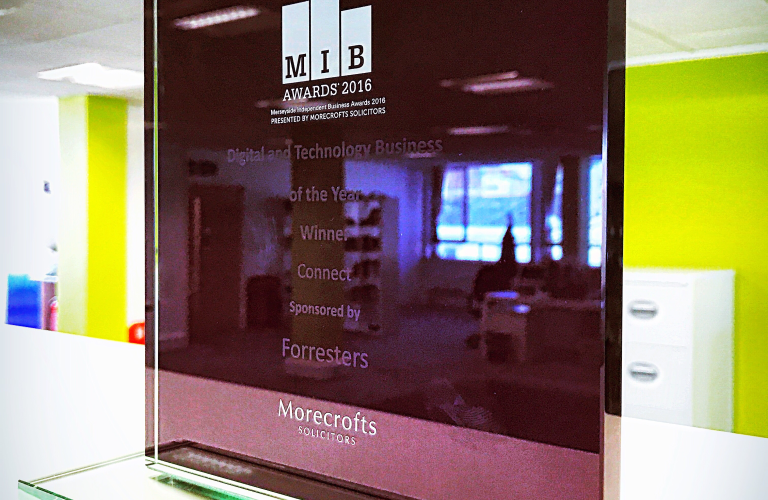 We are delighted to announce this morning that we were named the Best Independent Digital & Technology Business at the 2016 Merseyside Independent Business Awards last night.

The MIB Awards, now in their fourth year, were created to recognise the region’s independent business sector and to commemorate Morecrofts’ 200th anniversary in 2013.

From one-man operations to large employers, the prestigious awards see businesses from all over the county submit their case.

The awards are judged independently by two panels made up of key stakeholders including Liverpool Vision, Liverpool & Sefton Chamber of Commerce, Liverpool BID Company and more.

This year’s awards culminated with a black tie dinner at the Titanic Hotel’s Rum Warehouse on September 29th.

Connect’s joint managing directors, Carole Boardman and Janet Symes said: “Our success at the Merseyside Independent Business Awards has not only given us a platform to promote our work and show the country what we do best, but proves that Liverpool is a city packed full of creative talent.”

For more information about the Merseyside Independent Business Awards, visit the official website.

We are Connect – the original web development agency. We have been providing best-in-class design, development and data services to public and private sector clients since 1994.

Previous: Google rolls out Penguin 4.0
Next: Your AMP questions answered by Google