Last week, Facebook played host to 1 billion users for the very first time, during a week when the network released a stream of exciting new features

“For the first time ever, a mind-boggling 1 billion people used Facebook in a single day.

“The network currently reports 1.49 billion monthly active users, which means that around 2/3 of its entire user base logged on at some point last Monday.

“Facebook CEO, Mark Zuckerberg revealed the milestone in a post on Thursday afternoon, pointing out that the number is equivalent to one in seven people on Earth signed on to check out the social network over the course of 24 hours.” 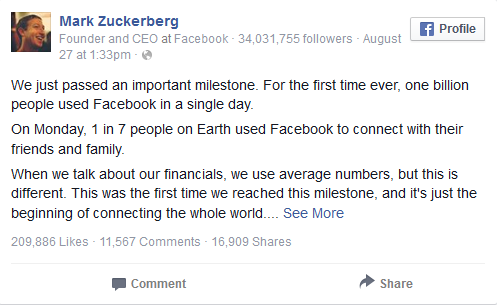 “Set to take on Siri, Google Now and Cortana, M is built into the Messenger experience, avoiding the awkward process of talking at your phone. Taking a different approach to their rivals, Facebook has baked M into functionality that’s already popular amongst their user base – Messenger is one of the most popular apps in the world, boasting 700 million monthly active users. Working with what people use and are already familiar with, M will enable users to ask questions via message.

“Facebook’s hope with M is to utilise the popularity of Messenger, combined with the data resources of Facebook, to create the ultimate utility for mobile discovery, stepping in on Google’s long-held turf. While Google is still the dominant player in search, Facebook’s hoping that M might be able to keep users within Facebook’s walls longer – if you’re already on Messenger and you want to search for answers, M will enable you to do so without clicking out and switching to another app.

“The crucial element in the initial stages of the M project will be accuracy and speed – if Facebook can provide a great service, that will increase user adoption and enable them to grow the functionality of the system.”

“Facebook says its long term goal is to provide a comprehensive video management system for publishers, vital if it is to position itself as an alternative to YouTube and court advertisers’ budgets.

“New video matching technology will now allow creators to identify matches of their videos on Facebook across Pages, profiles, groups, and locations. The tool should appease content creators for the time being, but Facebook promised this “is just the beginning” and it will continue to work on a more robust system that can match YouTube.”

If you’re a Facebook user, donating to your favorite cause is now easier than ever.

The network is rolling out a ‘Donate’ button for all non-profits to use on their Facebook Pages and link ads. Facebook previously introduced a similar button in 2013, but only to a select number of non-profit partners including UNICEF, Red Cross and DonorsChoose.org.

A Facebook spokesperson said: “Every day, people use Facebook to raise awareness and support causes they care about and to motivate others to do the same.

“We’re inspired by how much good comes from these connections, so we’ve added a ‘Donate’ call-to-action on Pages and link ads to make those connections easier than ever.”

Is Facebook moving in the right direction with its focus on service progression? Or is its reign as social top dog steadily coming to an end?