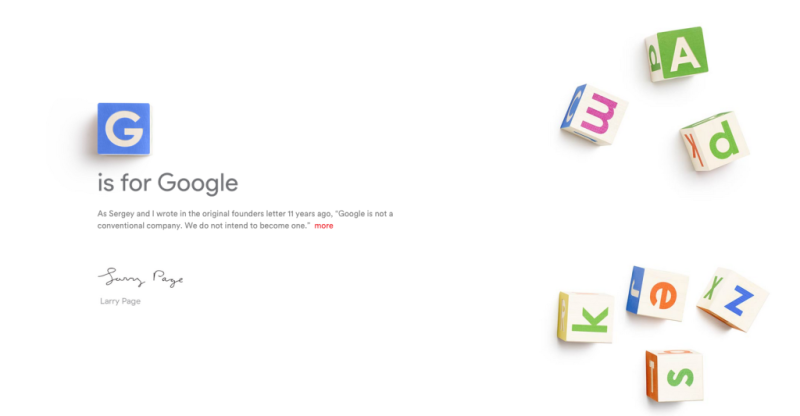 In a blog post published on Monday, Google CEO Larry Page announced a massive restructuring of the company, initiating Sundar Pichai as CEO and shifting himself and fellow co-founder, Sergey Brin to a larger holding company called Alphabet

“As CEO and President of Alphabet, Page and Brin will oversee Google as well as affiliated companies like the life-extension project, Calico and a drone delivery venture called Wing. Alphabet will also direct Google’s early-stage funding operations, dubbed Capital and Ventures. Under the new organisation, each of those operations will have its own CEO and leadership, while Pichai and Google retain control of search, ads, maps, the Google Play Store, YouTube, and Android.

“The reorganisation also involves significant financial restructuring, as detailed in an associated SEC filing. All Google shares will now be traded as shares of the larger Alphabet holding company, news that drove the company’s share price up more than four percentage points in the wake of the announcement. “We’ve long believed that over time companies tend to get comfortable doing the same thing, just making incremental changes,” Page writes in the post. “But in the technology industry, where revolutionary ideas drive the next big growth areas, you need to be a bit uncomfortable to stay relevant.”

Current Senior VP at Google, Sundar Pichai will become the CEO at Google when the reshuffle takes place

“A key part of this is Sundar Pichai. Sundar has been saying the things I would have said (and sometimes better!) for quite some time now, and I’ve been tremendously enjoying our work together. He has really stepped up since October of last year, when he took on product and engineering responsibility for our internet businesses. Sergey and I have been super excited about his progress and dedication to the company. And it is clear to us and our board that it is time for Sundar to be CEO of Google. I feel very fortunate to have someone as talented as he is to run the slightly slimmed down Google and this frees up time for me to continue to scale our aspirations.”

“As Sergey and I wrote in the original founders letter 11 years ago, “Google is not a conventional company. We do not intend to become one.” As part of that, we also said that you could expect us to make “smaller bets in areas that might seem very speculative or even strange when compared to our current businesses.” From the start, we’ve always strived to do more, and to do important and meaningful things with the resources we have.

“We’ve long believed that over time companies tend to get comfortable doing the same thing, just making incremental changes. But in the technology industry, where revolutionary ideas drive the next big growth areas, you need to be a bit uncomfortable to stay relevant.

“Our company is operating well today, but we think we can make it cleaner and more accountable. So we are creating a new company, called Alphabet. This new structure will allow us to keep tremendous focus on the extraordinary opportunities we have inside of Google.”

The Next Web’s Mic Wright believes Google’s restructure is “the biggest tech story of our time,” will allow the conglomerate to reach greater heights

“What was Google before? To most people it was a ‘search’ company. It is the name that became a verb. I’ll just Google that for you. No one else owns or owned search. Bing is a noise your iPhone makes. Ask Jeeves is now back to being a phrase you just find in P.G. Wodehouse books.

“Google needed to make the change and split the most ambitious tentacles of the sprawling squid off, to put them into their own petri dishes and allow them to grow independently. Creating ‘Google’ became a word too small to contain Brin and Page’s ambition – here’s why they needed Alphabet reaffirms something: Brin and Page are the most ambitious founders of our age.

“When it comes to predicting where the world is heading next, Brin and Page are a pair you should bet on. In the coming days and months, we’ll need cool heads, not hot takes to truly unpack this incredible moment.”

Surprisingly, despite housing the masters of search, Alphabet doesn’t own its .com equivalent…yet

“Alphabet just broke a cardinal rule: “If you have a startup called X and you don’t have x.com, you should probably change your name.

“Alphabet is already missing a few key pieces of its online presence. The organisation doesn’t have access to the @alphabet Twitter handle, the alphabet.com domain, the abc.com domain or an /alphabet extension on Facebook.”

The Next Web’s Lauren Hockenson suggests that Alphabet will be able to acquire anything it wants, with the power and sway of Google at its feet

“Although Google has operated under the guise of being a search and advertising company, but it’s hardly been that for some time now. The reorganization frees Google from itself (and its investors), allowing it to operate all of its companies without tethering it to Google’s search or advertisement business. It gives Larry Page and Sergey Brin a new level of flexibility and control over the different initiatives Google has already created in a way they did not have before.

“Out of the short list of businesses Brin named directly in the blog post explaining the list, he made a key point of articulating the new abilities of investment arms Google Ventures and Google Capital. He said that the team was excited to start “investing at the scale of the opportunities and resources we see.”

“The move will certainly allow Google Ventures and Google Capital to invest in companies it sees great potential in — and perhaps, over time, bring them under the umbrella also.”

Google-rival, Bing has poked fun at the conglomerate’s changes with a sneaky URL redirect

“Google’s big restructuring has many people scratching their heads. And perhaps the perfect reaction to the confusion came from Bing.

“The ABC.WTF domain now redirects to the Microsoft search engine.

“Is Microsoft officially having fun at Google’s expense?”

Previous: #ILookLikeAnEngineer goes viral, addresses sexism for women in tech
Next: All change at Twitter after series of social blows