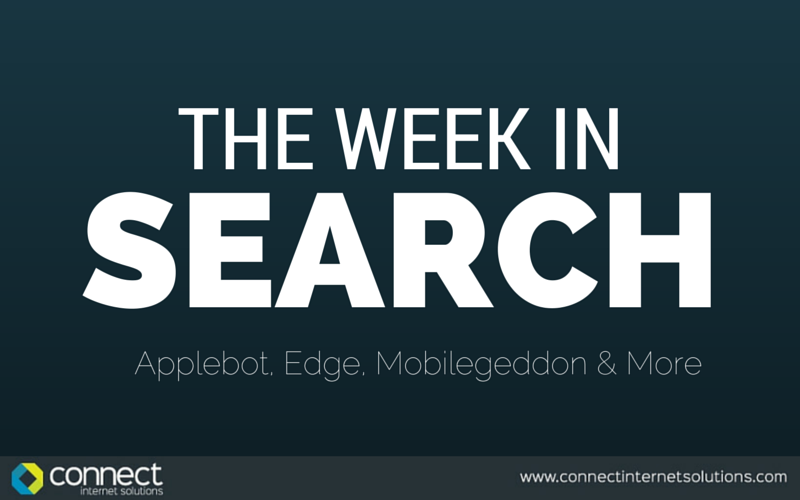 It has been a busy ol’ week in the world of search, so, sit back and let the Connect team break down the latest search engine news for you. This week; we take a look at Apple’s new indexing tool, Microsoft’s all-encompassing Internet Explorer replacement, we also address the initial impact Google’s new mobile algorithm has had on the SEO landscape, and how you can start viewing tweets directly within Google’s search engine results pages. Without further ado, let’s get to it!

Despite the rising hysteria that surrounded the launch of Google’s new mobile search algorithm, it would appear that, for many, the new mobile search update has been significantly less impactful than expected, based upon the rabid pre-launch speculation. Google’s latest algorithm has now fully rolled out across the globe, but it would appear that the scale of the algorithm has yet to reach the lofty heights of the Panda and Penguin updates.

Google’s Webmaster Trends Analyst, John Mueller was asked to explain the lack of movement in a recent web chat with members of the search community. He explained: “The (introduction 0f a) algorithm provides a very broad change. Whilst it has had a fairly big impact across search results, it doesn’t mean that in every result you will see big changes. The algorithm will affect a lot of different sites and a lot of different queries, but it is not such that a site will disappear from search results completely if they are not mobile-friendly.”

Google has since gone on record to express their surprise at the sheer number of sites that opted to promote their sites to a mobile-friendly strategy in the days before the upgrade, suggesting that any major movements in search rankings may take longer than expected due to the unexpected responsive adoption rates.

Mobile search overtakes desktop for the first time ever

We know all too well that billions of consumers across the globe turn to Google countless times a day for answers to their queries. Many of those consumers are now searching on-the-go and are looking to find instantaneous answers to their questions. In light of this, it is abundantly clear that consumers are turning to their hyperconnected mobile devices in order to achieve the results they demand quickly. Late last week, Google officially confirmed in an AdWords blog post, that more searches now take place on Google on mobile devices than on desktop computers in over 10 of the world’s largest countries, including the US and Japan. This monumental shift in search habits presents a tremendous opportunity for marketers to reach out to those looking for answers and engage with them on their individual digital paths.

In February, Google announced a refreshed major deal with Twitter that allows the engine to organically pull tweets from Twitter’s sever and display them natively within Google’s search engine results pages. Late last week, Google officially hit the switch on the integration, with relevant tweets now appearing in a handful of searches. At present, tweets are grouped into a traditional Google carousel structure, allowing users to swipe or click through for additional/related tweets. It would appear that only a small number of users are seeing this feature currently, with a full rollout expected over the coming weeks. Twitter’s CEO, Dick Costolo confirmed a rough timeline of “early May” for a global rollout, so expect to start seeing tweets within Google’s SERPs anytime now.

Initial reports from a small number of registered Facebook users suggest that the Facebook team are currently testing an internal search engine for its mobile application. A handful of iOS users have begun to see an “add a link” option displayed next to the standard sharing options within the app. Upon tapping on the option, users are encouraged to search for relevant keywords or phrases related to the content they are viewing, upon which Facebook will populate and suggest content that the user may find interesting based on the platform’s intelligent algorithms.

This update could be related to Facebook’s recent effort to encourage digital publishers to post content directly to the site, rather than elsewhere on the web. By hosting original content and allowing users to search for stories in its own app, Facebook is seeking to make the curation and discovery process significantly easier for users, ensuring you spend even more time on Facebook in the process.

Apple has officially confirmed its plans to scour the web for strengthened information with its new indexing tool, Applebot. Applebot is the Apple-certified name for its new web crawler, and is currently “used by Apple products,” including Siri and Spotlight Suggestions. It is expected within the Apple community that the tool will eventually be put to wider use across Apple’s ecosystem, and could potentially be baked into an as-yet unreleased native Apple search engine that has been touted for a number of years. Apple has subtly attempted to move away from the major search players with recent software updates, suggesting that the company could be looking to move away from relying on Google, Bing and Yahoo to power searchers across its  devices. With mobile search evidently nearing its peak, it will be interesting to see how far Apple is willing to go with this fresh foray into search.

Microsoft’s hopes to bring voice search to the masses

Earlier this month, Microsoft offered an exciting advanced preview of its new browser, Edge, to the world. The browser serves as a replacement for the soon-to-be defunct, and still very much in use, Internet Explorer. The new standardised browser includes some substantial tweaking to Microsoft’s voice search assistant, Cortana, in the hope that voice search will be welcomed and adopted by the masses when the platform launches later this year. The new browser has a sleek, minimalist design that boasts built-in Cortana support along with strengthened reading and digital ink note-taking capabilities.

Previous: The importance of responsive design
Next: Cyber Essentials certification